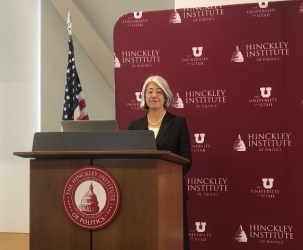 On Monday, October 14th, Consul-General Takeuchi visited the Hinckley Institute of Politics, the University of Utah to give a lecture entitled “Japan-US Relations: Japan’s Commitment to Global Security and Economy”. Around 60 participants including students and faculty members attended the lecture.

The Consul-General talked for about 45 minutes on aspects of Japan-US relations including politics, economy, and security issues, as well as the current situation on East Asia including China and North Korea, current affairs and events in Japan such as the Emperor succession and beginning of a new imperial era, the G20 Summit, the Rugby World Cup, and recent economic policies including Abenomics and Women Empowerment. Following the lecture, attendees asked many questions, highlighting a newly heightened interest in Japan.